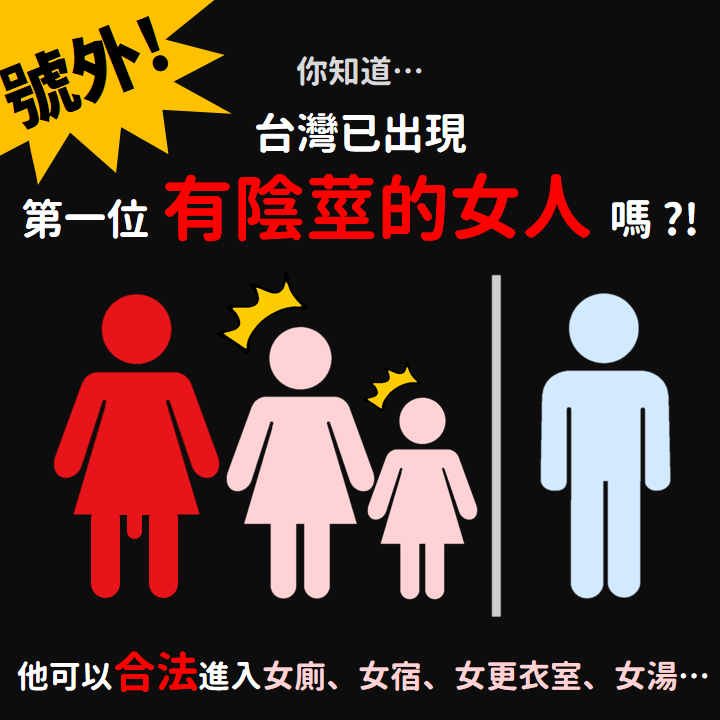 In women’s spaces, females can tell one’s intention by the sexual characteristics. Generally speaking, a decent male tends not to enter such spaces. After the GRA is passed, this method will be gone.


After the trans-identified male, Xiao E, successfully changed the legal sex without providing any proof of the removement of sex organs, trans lobbies like Taiwan Alliance to Promote Civil Partnership Rights (TAPCPR) began to propose a new but more radical policy, “Gender Self-Identification (Self-ID)”. In comparison with The Ministry of the Interior’s Administrative Interpretation and the Gender Recognition Act, this policy proposes that by “declaring to be another gender”, one can receive new legal documents as well as the rights to be treated as that gender. This proposal has provoked Taiwanese people’s concerns. They (many are Plurk users) are afraid that women spaces are not safe any more and start to suspect its purposes.

Amid this controversy of Taiwan’s GRA, the related terms are obfuscated and misused more frequently. For example, in the “Survey on People’s Attitudes to the Gender Recognition Act (GRA)” appointed to The Graduate Institute for Gender Studies at Shih Hsin University by the Administrative Yuan’s Department of Gender Equality, the introduction said that “Sex is very different from gender.” However, its first question said that “Do you agree that none of the markers should be put on one’s legal documents?”. The legal markers were defined as neither sex markers nor gender markers and thus the respondents might be very confused. Also, this survey attempted to mix “trans people” into “intersex people”. Its respondents might fail to understand what the subject (“them”) in the 4th question was: “Some people thought the requirement for a sex reassignment surgery was too strict…Globally, the requirements for legal sex change are reducing and Gender Self-Identification (Self-ID) becomes the main stream. In your opinion, what kind of requirements are appropriate to them?” Apparently, this survey aimed at leading its respondents to agree to the GRA without mentioning any global controversies over it.

We interviewed some people who were concerned about Taiwan’s new trans policies. Some told us that, “Taiwan’s current requirements for legal sex change were designed for transsexuals. However, transgenders criticized these requirements eve if accused the government of forcing them to do the surgery. So, why should the public buy these distorted facts? As for the GRA, some scumbags are very likely to take advantages of the loopholes in it. It is not difficult to get two certificates of diagnosis of gender dysphoria from different psychiatrists in Taiwan. As for Gender Self-Identification, the cost of crimes will be reduced to an unthinkable level.” Some argued that, “In women’s spaces, females can tell one’s intention by the sexual characteristics. Generally speaking, a decent male tends not to enter such spaces. After the GRA is passed, this method will be gone.” Some even made a prediction that “According to these loose trans policies, how do the public distinguish true trans from fake ones? In the long term, trans people’s reputation certainly will be sabotaged.”

At the same time, some of our interviewees have emphasized that (gender) diversity should not be achieved upon the exclusion of any group. They said, “If any group feels afraid, its voice should be paid attention to. Females’ concerns and fears should not be stigmatized as a ‘transphobic reaction’.” Also, one mentioned the Paragraph 6, Article 10 in the Additional Articles of the Constitution of the Republic of China: “The State shall protect the dignity of women, safeguard their personal safety, eliminate sexual discrimination, and further substantive gender equality.” Namely, women have the right to be fearless in single-sex spaces.