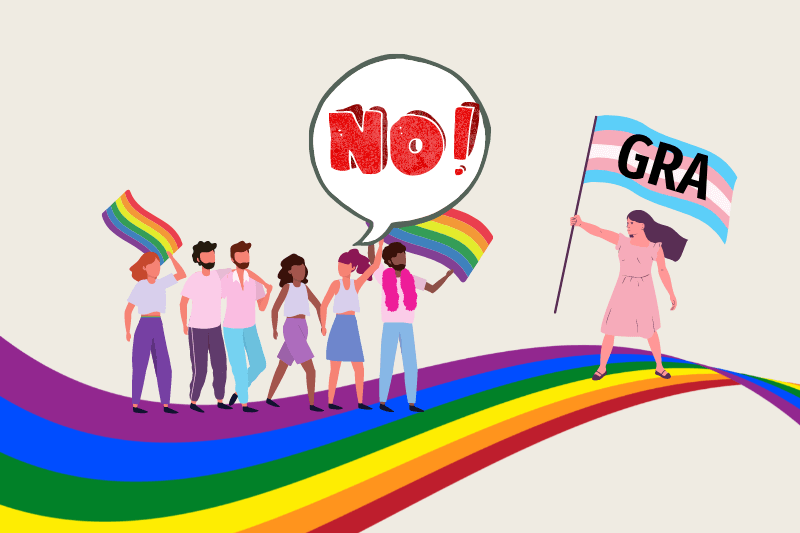 Off-Track Trans Policies (Part I): LGBTQ says no to GRA for trans women

When Taiwan’s LGBTQ members asked “how do we protect women from trans-identified males” on TAPCPR’s Facebook fan page, they were muted and blocked. Being disappointed and irritated, these members launched two petitions on Taiwan’s Public Policy Participation Platform.


According to The Ministry of the Interior’s Administrative Interpretation, the applicant must provide two certificates of diagnosis of “gender dysphoria” given by two psychiatrists as well as a certificate of diagnosis that he/ she has removed the male sex organs, including the penis and testicles. However, the Taipei High Administrative Court ruled against laws requiring transgender people to provide proof of surgery to change their legal sex on 23 Sep. 2021. The plaintiff, Xiao E, is a trans-identified male (who also has married a female) and thus become able to change the legal sex from male to female without receiving a sex reassignment surgery. This news provoked a major conflict in Taiwan’s LGBTQ communities.

In our survey, Taiwan Alliance to Promote Civil Partnership Rights (TAPCPR), the lobby which has helped Xiao E to file this lawsuit, advocates Taiwan’s Gender Recognition Act (GRA). In its draft of this act, “trans people” are referred to not only transsexuals (who seek for sex reassignment surgeries due to their gender identity disorder (GID)) but also transgenders (who do not seek for changing original sex organs), transvestites and crossdressers (CD) (who prefer to wear the clothes of the opposite sex), autogynephiles (AGP) (who tend to be sexually aroused by the thoughts of himself as a female). Also, we found out that in the European nations and some states in the US which have implemented this act without any supplements, a number of crimes (especially for sex crimes) were committed in the name of trans identities. For example, some trans-identified male prisoners raped female inmates, a trans-identified male swimmer exposed the penis in female SPA, a trans-identified male customer asked female beauticians to remove the hair from the “girl dick” 1.

Moreover, we noticed that in Sep. 2020, the Administrative Yuan’s Department of Gender Equality put the “Survey on People’s Attitudes to the Gender Recognition Act (GRA)” out to tender. The Graduate Institute for Gender Studies at Shih Hsin University offered a tender price which was 1,300,000 NTD (43,763 USD) and thus became the official supplier. This commission ended on 15 Jan. 2022 and would serve as the base for the Administrative Yuan’s draft of the GRA. In fact, according to our investigation, the design of this survey is not objective enough even if misleading the respondents to the thought that the GRA is the international stream of trans rights movement. Further, although this survey aimed at collecting “public opinion”, it was posted in specific LGBTQ communities, needless to say, to be searched and filled out by the public. The most important is that, this tender (or commission) would be reviewed by only two NGO representatives, the secretary-general from Taiwan Tongzhi Hotline Association (TTHA) (Hsin-Chieh Lu) and the executive chief from Taiwan Equality Campaign (Ying-Chih Tsai). Among all the reviewers (7 in total), none of them are from the NGOs for children’s rights and women’ s rights.

Meanwhile, the “GRA” which has severely impacted women’s safety and rights in some European nations and the US, is rolled out in Taiwan “without any supplements”. When Taiwan’s LGBTQ members asked “how do we protect women from trans-identified males” on TAPCPR’s Facebook fan page, they were muted and blocked. Being disappointed and irritated, these members launched two petitions on Taiwan’s Public Policy Participation Platform: “Introduce a clear sexual separation for the safety of women and children for the purpose of reducing the problems will caused by the Gender Recognition Act” and “Postpone every procedure and policy about ‘changing sex markers on ID cards without the proof of SRS’”. To stop the off-track trans policies, both two petitions started their campaign on social networks like Plurk. (Soon they got full number of signatures before the deadlines.)

We (CTWANT) asked TAPCPR about the concerns mentioned as above. Nevertheless, the secretary-general’s reply to women’s spaces and safety is: “It is often assumed that: So long as penised individuals are recognizable in women spaces, then women’s safety will be promised.” She also said: “Our organization deems that the point of spaces and safety is providers’ management and maintenance instead of users’ trans identities. For example, more lights, alarms, and patrols should be provided in such spaces. Or, the gap between doors and floor should not be huge (at least the air can go in and out).”

We also asked The Garden of Hope Foundation and Awakening Foundation about how Taiwan’s GRA would influence women’s safety and their advices on possible supplements. Their replies are similar: Since the it raises a wide range of issues, we are still discussing and negotiating with our own members. So far we are not able to make a clear statement on it.

We asked the Administrative Yuan about the two petitions and its survey on the GRA but did not get any reply before the deadline of this reporting.