Globally, the mainstream of treatment for transgender people adopts the affirmative approach. Simply speaking, to transgender children (including those who feel anxious about their own genders), this approach holds an affirmative attitude toward their feelings; at the same time, to prevent these children from hurting themselves or even committing suicides, it gives them puberty blockers and hormone medicines as soon as it can.

However, the causes of gender dysphoria are complicated and the syndromes may stop developing till those children become adults. Also, gender reassignment treatment may not cure every patient’s gender dysphoria.

After the affirmative approach was adopted, the number of patients of gender dysphoria increased rapidly. The underage people received their gender reassignment treatment without a proper evaluation. The number of people who stopped their transitions (aka detrans) were growing. However, the effects produced by gender reassignment treatment are irreversible and permanent.

The psychiatrist, Zhi-Yun Xu, has been collaborating with Taiwan Alliance to Promote Civil Partnership Rights (TAPCPR) for a long time. (Xu is an attending physician of MOHW’s Kinmen Hospital and adjunct attending physician of NTU Hospital’s Department of Psychiatry. He is an ex-Dean of TTHA.) Xu admitted that he gave puberty blockers to a 5th grade student who had gender dysphoria. 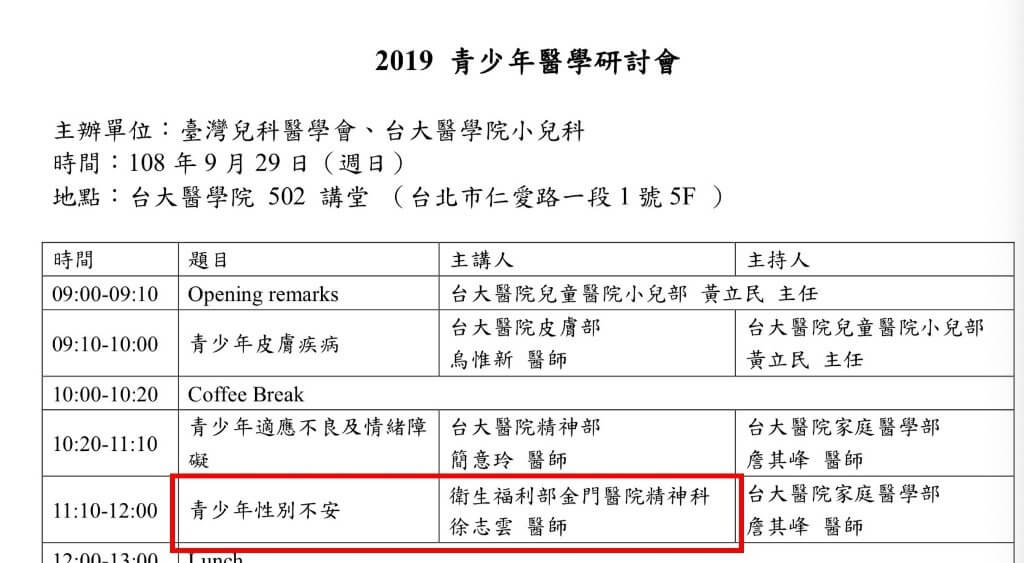 As it is reported in the article, the anonymous physician is supposed to be Zhi-Yun Xu, the keynote speaker of the seminar.
Source: The Agenda of 2019 Seminar on Adolescent Medicine

As it is reported in the article, the anonymous physician is supposed to be Zhi-Yun Xu, the keynote speaker of the seminar.
Source: The Agenda of 2019 Seminar on Adolescent Medicine
Lesbians