A women-only space is the border and frontier for women to stay safe in public places. In the beginning, it was built to protect women.

Globally, women-only spaces and related services are harmed due to the permission for those “trans-identified males” to access both. As a result, women are deprived of personal safety and dignity.

Yan Fong admitted that during her service as the Dean of Student Affairs (from Aug. 2005 to Jul. 2012) she “secretly” helped several trans students transfer to the dormitories of their self-identified genders. She also said that beside the submittance of medical reports of gender dysphoria, these students’ parents and roommates were acknowledged.

NTU’s Ex- Dean of Student Affairs “transfers transgender students to dormitories of their genders”: Shall not sit and watch Xiao Yu suffer from living in the male dormitory

A NTNU’s trans-identified male staff went to the female swimming pool changing room at the campus. The staff was reported to the police by an off-campus swimmer. After the discussion of NTNU’s Gender Equality Committee, the staff was allowed to use female’s changing rooms and restrooms.

ISTS Care has been in a long-term collaboration with TAPCPR. Its director, Yi-Ting Wu, not only supported self-ID but also insisted that all restrooms should be modified as “unisex restrooms”. Besides, she has threatened to sue the people who suspected trans women as male predators and tried to expel them from female restrooms.

ISTS Care’s director, Yi-Ting Wu, deemed that all restrooms in the Executive Yuan should be modified as “unisex restrooms”.
Source: Up Media

Wu has threatened to sue the people who suspected …

Wu has threatened to sue the people who suspected trans women as male predators and tried to expel them from female restrooms.
Source: The News Lens

TAPCPR stood against the transgender markers on ID cards. It proposed that these markers would cause troubles of explanation for transgender people. 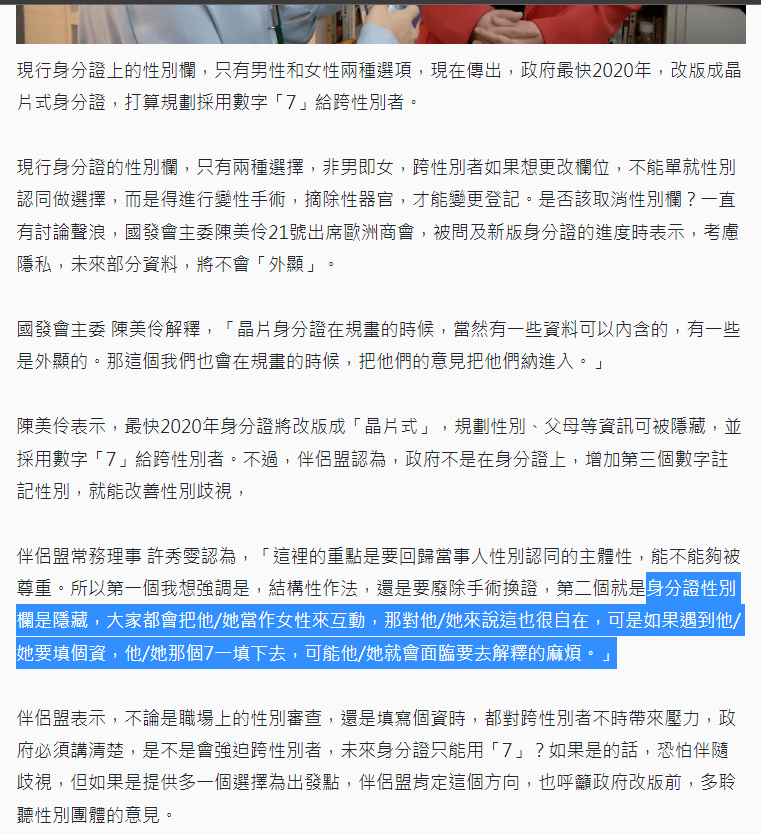 These transgender markers would cause troubles of explanation for transgender people.
Source: PTS’ Official Website

(TAPCPR’s Lawsuit) In 2017, a trans woman, Yu-Hsun Wu, applied to live in the female dormitory at Chang Gung University (CGU). After a negotiation between Wu and the university, the independent room in a unisex dormitory was offered to Wu in order to save him from the uncomfortable feelings of living with male classmates. When Wu said that he was not used to this place, the university advised him to live in a new gender-friendly dormitory built next to the female dormitory. However, Wu and TAPCPR deemed this arrangement as a type of gender separation.

On 13 Apr. 2018, it was said that a man broke into “Nanping Public Bathroom” of the female hot spring on the Jin Mountain in New Taipei City. According to one female guest, the person had long hair, flat chest, and masculine face. When she saw this person’s penis, she asked him to leave. However, the man repudiated that “don’t refer to me as a man” and left in haste.

Cross-dressing male in female hot spring on Jin Mountain! When suspected, “he” replies in this way

(TAPCPR’s Lawsuit) In 2019, Ms. Yang, a trans woman, joined a job interview held by a startup company. During the interview, Yang mentioned her need for using female restroom whereas the interviewer did not make a promise for that. On 9 May, the company informed Yang that other female colleagues would use the female restroom only if she was absent. Thus, the company suggested Yang use the accessible restroom. Though the company did not hire Yang, it was fined NT$300,000 for gender discrimination.

Company fined NT$300,000 for gender discrimination because of its rejection to trans interviewee’s requirement for female restroom ｜The Judgement

In the draft of the Equality Act, TAPCPR has added one’s gender identity. It has claimed that “the people who already change or seek to change their sexes could suffer from gender discrimination” hence “any rejection to their access to products, service, and facilities” is a type of gender discrimination.

The protected characteristics of gender …

The protected characteristics of gender discrimination include “the people who already change or seek to change their sexes”.
Source: PowerPoint of draft of the Anti-Discrimination Act (the Equality Act)

The type of gender discrimination includes “any …

The type of gender discrimination includes “any rejection to their access to products, service, and facilities”.
Source: PowerPoint of draft of the Anti-Discrimination Act (the Equality Act)

In its training plan for seed teachers, TAPCPR tried to obfuscate the ideas of home restrooms, family restrooms, racial separation, and Yong-Zhi Ye Incident with public restrooms divided by sexes. It tried to make a conclusion that “sex-based restrooms are nonsense” in order to promote the idea of “gender-identity-based restrooms”.

Sex or gender separation should not exist in …

Sex or gender separation should not exist in spaces and awards.
Source: Training Plan for Seed Teachers

A trans woman insisted that even if her penis …

A trans woman insisted that even if her penis could not be hidden under the swimming suit, she should be allowed to use female changing room.
Source: Training Plan for Seed Teachers

TAPCPR has claimed that the trans woman criminals are not “true trans” or belong to the random cases. It also has criticized that women’s fear is irrational and boundless; thus, it should not be dealt by laws.

The concerns about global cases are irrational …

The concerns about global cases are irrational fears.
Source: 2021/TAPCPR’s Conference about Taiwan’s GRA on Oct. 16

The trans women criminals of global cases are not …

The trans women criminals of global cases are not true trans but the men who exploit the GRA.
Source: 2021/TAPCPR’s Conference about Taiwan’s GRA on Oct. 16

Laws do not deal with anyone’s boundless fears.

Laws do not deal with anyone’s boundless fears.
Source: 2021/TAPCPR’s Conference about Taiwan’s GRA on Oct. 16

The case of Karen White is “strictly speaking” not …

The case of Karen White is “strictly speaking” not related to Taiwan’s GRA
Source: Post on Facebook

Controversial data and researches still can prove that trans women do not influence the safety of female restrooms.
Source: Post on Facebook

TTHA also supported gender-identity-based restrooms and lobbied for the Equality Act (including the discrimination against one’s gender identity). 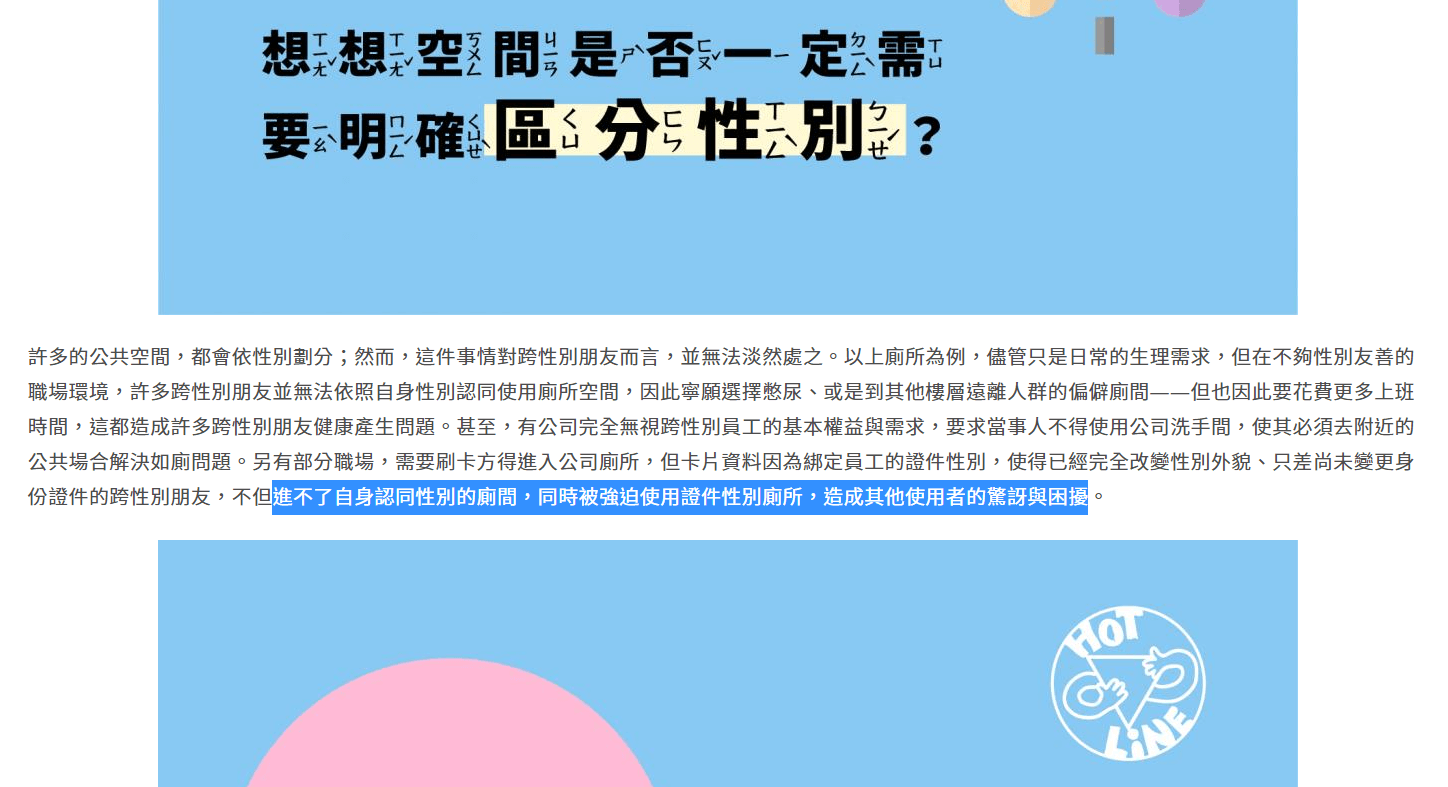 TTHA said that if trans people use sex-based restrooms, they will scare others in the same room.
Source: TTHA’s Official Website

TTHA said that if trans people use sex-based restrooms, they will scare others in the same room.
Source: TTHA’s Official Website
TTHA also lobbied for the Equality Act (including …

TTHA also lobbied for the Equality Act (including …

In Aug. 2020, a trans woman, Chang, joined a job interview held by Tung Fang Mei Company (TFM). Chang applied for beauty product salesperson which would have many body contacts with customers. For example, Chang would have to smear the product over customers’ face and neck. Also, when providing personal beauty service, Chang would have to touch customers’ head, hands, neck, shoulders, upper back, and breasts. After the interview, TFM told Chang: “We can discuss more details if you are willing to wear our male uniform. If you insist on wearing a female uniform, we have no choice but to reject you.” Chang felt she had been discriminated against because of her gender identity. Based upon the Act of Gender Equality in Employment, Chang filed a lawsuit. The Ministry of Labor (MOL) fined TFM NT$300,000.
However, TFM made an appeal. It said that because of the specific needs for this position, its customers have tended to choose same-sex beautician during the service. It emphasized that the design of male and female uniforms was to let its customers easily recognize the employee’s sex. Even so, TFM lost this lawsuit at The Taipei High Administrative Court.

Only if you wear our male uniform! A beauty company fined NT$300,000 for its rejection to trans interviewee ｜The Judgement

To the trans student at NCKU’s female dormitory, female students opposed: Gender friendliness should not be based on the cancelling of women’s spaces! ｜News 2 ｜News 3

According to Taiwan’s statistics about sex crimes, women experience sexual violence at a high rate whereas men are the most majority of sexual offenders. What is worse is, there is a low chance that these sex crimes will be appealed and convicted. The percentage of women being sexually offended in public spaces is significantly higher than the one of men. 1 Thus, women’s negative experiences in public spaces are mainly about insecurity. To allow men to enter women’s spaces is depriving women of personal safety and the right to use public spaces.

Now, women increasingly gain the right to enter public spaces, yet they still are the weaker party in these places.

From the aspect of physical space and relational space, in mass culture, it is constantly implied that women are always a symbol of men’s potential desire objects; further, the society asks women to do self-protection. Thus, women become more vulnerable to sexual harassments. These conditions cause women to frequently feel embarrassed or limited. For example, if a public open space like park is crowded with men, women may try to avoid getting close to; therefore, it will be naturally formed into a men-only space.1

In short, the limitations on women’s bodies, behaviors, and spaces are the requests made by the society. In public spaces, the gaze and norms limit women’s body act more strictly than men’s. For example, the norm that “the women who spread their legs are inviting a sexual touching” forces women to close their legs in every public space. However, women have the needs to exercise their bodies. Therefore, women-only spaces like gyms, exercise yards, and yoga spaces are formed. 1

If women’s spaces are destroyed, women may be less willing to enter public spaces; further, they will lose the right to enter these places.

The Difficulties in Managing Gender-Identity-Based Facilities

Swimming pools, hot springs, saunas and gyms are divided by sexes. If it is impossible to prevent the opposite sex from entering these same-sex spaces, customers’ willingness to purchase and enter may be reduced.

If the Gender Recognition Act or Self ID is passed, how does any business owner know the sex of their customer? Will single-sex spaces be discriminatory even if unlawful?

The Services Preferred to Be Single-Sex

The examples below including company facilities, room arrangement for company trips and business trips, etc.