Globally, a number of hospitals, editorials, medical journals and many other organizations began to replace “women” with “pregnant people”, “people who menstruate”, “vagina havers”, and “birthing people”. In English, the definition of “women” includes “biological women” and “socially-recognized women”. As a result, trans women/ men feel uncomfortable when they are referred to as one instead of both/ none. However, they tend to keep the latter by erasing the former.

Similar cases happened to Chinese, too. If we say “女性 (women)”, we may refer to “生理女性 (biological women)” or “社會性女性 (socially-recognized women)”. In order not to make trans people feel uncomfortable, many tend to use “生理女性 (biological women)” or “原生女性 (assigned females at birth)”. Thus, it is predictable that the word, “女性 (women)”, will be gradually erased. Further, some Taiwanese trans women began to call women as “分娩人(pregnant people)”.

For TAPCPR, one’s sex may change due to endocrine disorders, menopause, HRT, SRS, and so on. With this statement, TAPCPR has implied that trans people can change their sexes; further, it has suggested that a man/ woman is not a male/ female if he or she has an endocrine disorder, enter the menopause or, does not have a sexual organ (e. g. the women who do not have wombs or are infertile). 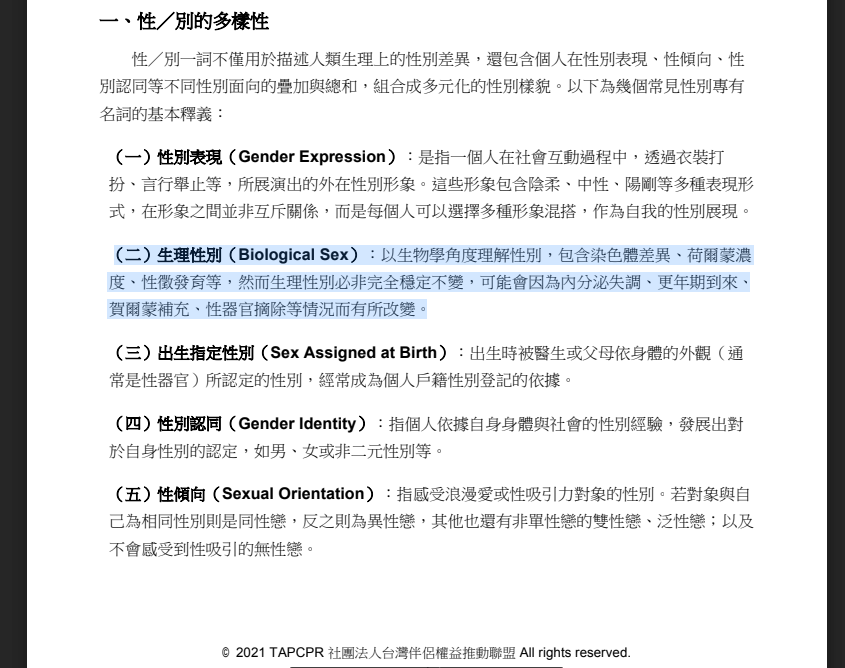 TAPCPR’s supporters began to refer to women as birthing people. A trans man expressed his uncomfortable feelings when seeing such references.

The comments below. 1
Source: “‘Rolling in’ Taiwanese Women’s Safe Spaces in Silence: The Gender Recognition Act Rolled out without Acknowledgement”

The comments below. 2
Source: “‘Rolling in’ Taiwanese Women’s Safe Spaces in Silence: The Gender Recognition Act Rolled out without Acknowledgement”

The comments below. 3
Source: “‘Rolling in’ Taiwanese Women’s Safe Spaces in Silence: The Gender Recognition Act Rolled out without Acknowledgement”